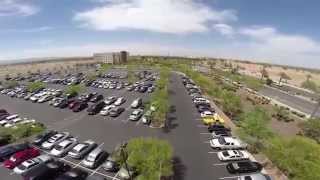 Chandler is ranked the best city to buy a home big enough to raise a family, according to a data analysis from SmartAsset. Read the article by clicking HERE.


Great care has gone into meeting the lifestyle expectations of Chandler's residents. Between 1990 and 2000, Chandler was the seventh fastest growing city in the United States of those with a population more than 100,000.

THE STORY OF CHANDLER (From www.ChandlerAZ.gov)

The Story of Chandler, Arizona

In 1891, Dr. Alexander John Chandler, the first veterinary surgeon for the territory of Arizona, bought 80 acres of land from the federal government south of Mesa in the Salt River Valley. Dr. Chandler studied the relatively new science of irrigation engineering and was instrumental in building an early system of canals in what was then an arid desert.

By the turn of the century, Dr. Chandler owned an 18,000 acre ranch. The charter of the Salt River Project provided that each landowner could obtain enough water to irrigate only 160 acres. Dr. Chandler sought the help of planners and architects in subdividing his ranch and drawing up a townsite map. He then advertised nationally the sale of Chandler Ranch sites.

On May 17, 1912, Dr. Chandler opened the townsite office. Excursion trains on the newly completed Arizona Eastern Railroad brought 300 speculators who spent $50,000 for land that day.

The town then consisted of three wooden shacks -- the townsite office, a dining hall and the Morrison Grocery. There was also a billboard marking the site of the elegant future Hotel San Marcos. Dr. Chandler had an ambitious plan that was well ahead of his time. He envisioned a landscaped central park that would be surrounded by businesses. The walkways in front of the buildings would be covered by a trellis-like roof, supported by colonnades. Deed restrictions required land owners to build on their land within one year.

One year after the first land sale, Chandler was beginning to look like an established town. Businesses had been built along the west and south side of the park, including the Bank of Chandler and the Eastern Railroad depot.

Graded dirt roads encircled the park, and there were wagons, carts and Model T Fords busily moving about the town. The park was covered by grass, with newly planted trees, and was divided into a north and south side by the Commonwealth Canal.

The grand opening of the Hotel San Marcos took place on November 22, 1913. Among the 500 guests present were Governor George P. Hunt and Vice President Thomas Marshall. The hotel was an immediate success with wealthy visitors coming from all over the country every winter.

But agriculture was still the big business in Chandler at the time. Cotton, grains and alfalfa were the primary crops. Farmers also raised cattle, sheep and, yes, ostriches. Ostrich feathers were used to adorn popular women's fashions. Top quality feathers sold for as much as $250 a pound.

As the years passed, cotton became the most common and profitable crop in Chandler. By the time World War I began, long-staple cotton was in demand to be used for the production of rubber tires and aircraft fabrics. During the war, the Goodyear Tire Company leased 8,000 acres south of town from the Chandler Improvement Company and built the town of Goodyear.

By 1920, Chandler had more than 1,000 residents. Automobiles had become the main form of transportation, so the town's roads needed to be paved. The water and sewage systems were also outdated and the utility services were unreliable.

Arthur Price, the local Justice of the Peace, drafted the town's first charter, and in May of 1920, the citizens voted to incorporate and become the Town of Chandler. Dr. Chandler agreed to serve as the first mayor until one could be elected. They soon after elected a mayor and council.

The Great Depression was not a devastating experience for most of Chandler's residents. The cotton crash of 1920 had a far greater impact on the agriculturally based economy. Dr. Chandler, however, did not fare so well during the depression years. The Bank of Chandler collapsed and he lost the San Marcos to his creditors. He was able to retire comfortably, though, and lived in a cottage on the grounds of the hotel.

By the late 1930s, Chandler was experiencing some problems spurred by growth and technology. Drivers of the new faster cars sometimes didn't realize that Arizona Avenue then ended at the town plaza. Cars often jumped the curb and drove right into the park. And the large diesel trucks that made deliveries to businesses around the park had trouble navigating the narrow roads around the plaza.

In 1940, the state proposed to align Route 87 down Arizona Avenue. Residents were not happy to see their beautiful park divided in half for a highway, but the town's original design was no longer safe or practical.

In 1941, the U.S. Army Air Corps announced its plans for the construction of a fighter pilot training base east of Chandler. The base began operations in October and two months later Japanese bombers attacked Pearl Harbor. It soon became common to see uniformed men in town.

On August 14, 1945, Chandler residents celebrated late into the night when they received news of the end of the war.

In recent years, Chandler's borders have been expanded and the population has boomed -- from 30,000 in 1980 to more than 240,000 today. The economic base of Chandler has been diversified. While agriculture is still somewhat of a vital element, Chandler now enjoys a strong manufacturing and electronics sector.

The downtown storefronts have been restored to a modern version of their original turn-of-the-century look, and the plaza has been redesigned and named after the City's founder. The Center for the Arts, new parks, restaurants and retail centers mark an exciting future for the City.

Family festivals such as the Ostrich Festival, and a host of other annual events, make Chandler a popular draw for travelers from all across the country.

And the citizens of Chandler enjoy a quality of life unsurpassed in the Valley today. It certainly appears that Dr. Chandler knew what he was doing the day he dreamed of this jewel in the desert.

Community Profile and Demographics  (from www.ChandlerAZ.gov)

The City of Chandler, Arizona was founded in 1912 and incorporated in 1920. Since its early beginnings, Chandler is a vibrant, diverse community. Below is a brief community profile:

Chandler has successfully diversified its economy.  Agriculture is still important, but the city is now a high-tech industry center.  Motorola, Intel, Avnet, Orbital, and Rogers are all part of the high-tech industries in Chandler. To read more, please click here.

There are several links to maps available on the City of Chandler's website.  One of them is InfoMap.  To access InfoMap and for more links that may be of interest, click here.

If you are planning a move to Chandler and have children, schools will be an important topic to you.  We believe you'll like what Chandler has to offer!  You can visit the school district's website by clicking here.

See how Chandler schools rate on greatschools.com.  Click here for the ratings.

Visit Chandler is a great website for anyone planning a trip to our lovely city.  You will find information about events, weather, hotels, shopping, meeting planning, and lots more.

View All The Latest Listings

View All The Latest Listings

Information Deemed Reliable But Not Guaranteed. All information should be verified by the recipient and none is guaranteed as accurate by ARMLS. ARMLS Logo indicates that a property listed by a real estate brokerage other than RE/MAX Infinity​. Copyright 2020 Arizona Regional Multiple Listing Service, Inc. All rights reserved.